The skyscrapers of Dubai rocked and residents panicked as tremors of a 7.8 magnitude earthquake passed through Dubai. The earthquake origniated at border of … Read more

This just got in, exclusive for DubaiExpatBlog readers.

Over 100 vehicles collapsed into each other due to fog and low visibility. The exact place of accident is yet not known but it is somewhere near the last ADNOC station towards Dubai. 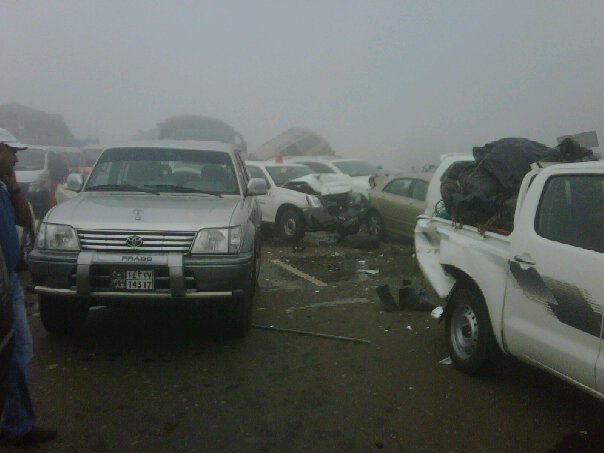 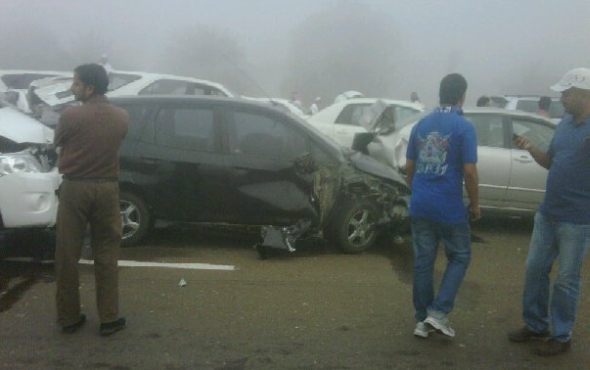 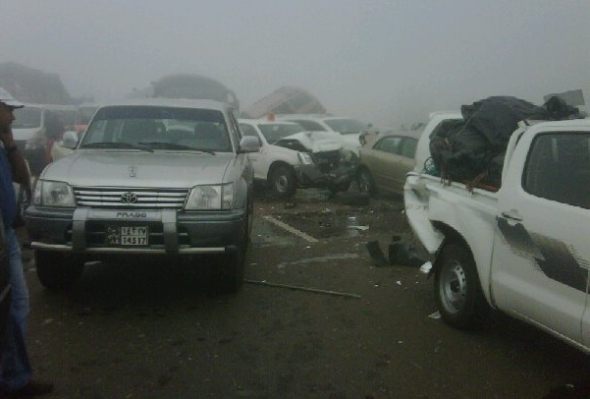 Emirates and Etihad airlines symbolize Dubai and Abu Dhabi, how one is all glorified, mostly in self-inspired awe and admiration, hiding the defects and weaknesses under the rug, and how the other is professionally catching up, one systematic step at a time.

According to ArabianBusiness, the UAE’s population of just over four million people is nowhere near big enough to sustain two such large airlines.

Yet, here we have Emirates which flew 21 million passengers last year, and is said to be set to become the world’s largest airline during the next ten years. Emirates is awaiting 58 Airbus A380’s – the biggest planes in the sky. Such is the power said to be enjoyed by Tim Clark, head of Emirates, within the industry that he was believed to be able to pressure Airbus and Boeing into designing aircraft that are ideally suited to the needs of his airline, rather than to those of others.

Then came Etihad, set up five years ago and is heavily backed by the Abu Dhabi government, is yet to break even, but is on course to do so. Last year it carried six million passengers.

Since global downturn reached the sands of UAE, rumors of merger between Emirates and Etihad are ripe. Every now and then some news piece, op-ed or analysis comes up, debating the pros and cons of such an action.

It is speculated that since Dubai has been hit by credit crunch driven recession, it will start looking towards its neighbor for financial support, resuling in possible mergers of institutions that have similar target markets.. Recent example of such a merger is announcement by the UAE government about creation of Emirates Development Bank – which is the end product of a merger between two banks and the UAE’s two largest home finance providers.

Last year, when asked about the possibility of a merger, Etihad CEO James Hogan said: “What’s the difference between having Emirates and Etihad nearby to each other here, and the cluster of European hubs – London, Paris, Frankfurt and Amsterdam? Or Kuala Lumpur, Singapore and Bangkok? We have seen that proximity doesn’t negate viability.

If, for argument’s sake, we take the rumors to be true and consider the merger as happening, here is how Shashank Nigam observes the shape of things to come:

1. Etihad takes a large stake in Emirates, just like Lufthansa has a stake in Austrian or Swiss
2. Both brands should be kept intact
3. Etihad and Emirates optimize their route networks such that they complement each other and don’t bleed each other on major route. For example, instead of offering flight from Sydney to London 20 mins apart from each other, they can be more even spread out throughout the day. And I don’t think an Aussie is concerned whether he would transit in Abu Dhabi or Dubai on his way to London
4. Both Emirates and Etihad should optimize capacity on certain routes. For example, an Etihad A320 can be sent to Cochin or Peshawar, instead of an Emirates B777.
5. They save money through join procurement and technology implementation

• Emirates has 127 aircraft and 153 on its order book while Etihad has 46 aircraft and 205 on its order book, which means they will have 280 and 251 respectively. The combination of the fleets would make it the world’s fourth largest airline by aircraft fleet.
• Emirates flies to over 100 destinations and so does Etihad, when you account for its code share destinations as well. They both service similar destinations and so a merged entity would be able to fly to even more destinations.
• Having one large airline in the country with a large airport complex such as Jebel Ali Airport would allow it to negotiate new routes from a much stronger stand point.
• The proximity to Jebel Ali Seaport would fundamentally transform the cargo business, allowing for the development of a mixed use hub where air freight and sea freight solutions can be creatively developed according to a cost and time matrix.

Most importantly, she argues that; Yet the rationale for Emirates and Etihad to merge is more than just synergy. It is about bringing together two airlines that were set up to promote their respective cities and signalling a shift in the mentality of defining where one city ends and the other begins.

Will there be a merger between Emirates and Etihad, only time will tell.

Dubai Roads and Transport Authority (RTA) launched an initiative that is going to ease travel expenses of recession-hit expatriates.

According to Khaleej Times, The Public Transport Agency (PTA) of the Roads and Transport Authority (RTA) inaugurated the much-awaited Deluxe Coach bus service between Dubai and Abu Dhabi.

Essa Al Dossari, the CEO of the PTA, said 10 Coach buses would ply on the route in the first phase. Eventually, there would be 55 buses on the route. The one-side fare is Dh20. Initially, these buses will transport passengers to the capital and Al Ain and the service would be extended to more areas in the coming phases.

The coaches have top-class luxury standards and are fitted with seats emulating aircraft’s Business Class seats, with ample space between seats along with audio-visual multi-channel entertainment packages. Additionally, the coaches are fitted with wireless internet service (WiFi) as well as a food compartment and toilets, the top official said.

“These new buses are of Volvo B12B brand and are fitted with the latest version of Euro IV engines that meet high environmental standards, a unique transmission system (I-Shift), and sophisticated braking and stability systems (ESP).