You are here: Home > Tremors rock Dubai as Earthquake cause devastation in Iran and Pakistan

Tremors rock Dubai as Earthquake cause devastation in Iran and Pakistan 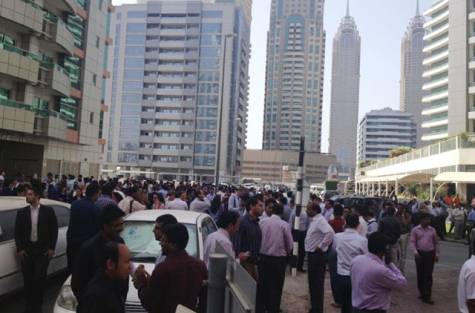 People out on streets after earthquake tremors rocked Dubai

The skyscrapers of Dubai rocked and residents panicked as tremors of a 7.8 magnitude earthquake passed through Dubai.

The earthquake origniated at border of Iran and Pakistan and its shockwaves travelled through UAE, Kuwait, Bahrain and Saudi Arabia.


Just week earlier, another set of tremors passed through Dubai. Fortunately no human lives were lost.

Emirates 24|7 reportes that The National Centre of Metrology and Seismology (NCMS) in Abu Dhabi confirmed  that the epicentre of the quake was some 650km off the coast of Ras Al Khaimah.

The 7.8-magnitude earthquake was recorded on the border of Iran and Pakistan, 650km northeast of Ras Al Khaimah, and approximately 30km underground. It happened at  2.45pm UAE time, according to the United States Geological Survey (USGS).

Most of the buildings were evacuated for saftety purposes.

No loss of human lives reported as the tremors receded.