You are here: Home > Laborer Recruitment declining in Dubai 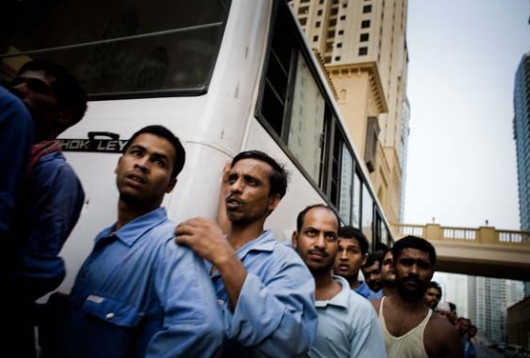 While the official version on economy of Dubai is that things are as rosy as they come, reality is very much in contrast to the propaganda.


As Arabian Business reports, the number of construction workers arriving in Dubai has practically ground to a halt in the last few months.

A spokesperson from the Dhoria International Job Centre said the company was recruiting between 200 and 400 workers a month last year, but in the last four months it had only recruited a total of four workers.

The standard length of contracts is three years. While most workers usually stay in Dubai for the full three years, some were now being sent home early due to the slowdown in the Dubai construction market.

The spokesperson reported that last year the company recruited 300 workers for one well-known Dubai construction firm, who he declined to name, and 200 of them have already been sent home.

While the emirate may be seeing a drop off in recruitment, the company is seeing an increase in demand for workers in Saudi Arabia and it has been contracted by a large Saudi construction company to recruit 1,500 workers for a project due to start in six weeks.

It is to be noted that most recruitment agencies charge up to three months of salary from the laborers in lieu of visa and processing charges. However, there is no compensation if a person is fired after a year of his 3-year contract. This is clearly a lose-lose situation for the laborers who invest a lot to secure a job in Dubai.