You are here: Home > Earthquake in Dubai felt today

Residents of Dubai, and UAE, felt the ground shake under their feet around 4pm today as a 6.3 magnitude earthquake struck Southern Iran.

An aftershock measuring 5.4 was reported 13 minutes after the first earthquake.

“An earthquake has struck South of Iran measuring 6.2. The tremors were felt in Dubai, Abu Dhabi and Sharjah because of its epicentre.”

“The earthquake struck at 3.52pm UAE time, with its epicentre in Shiraz loacted 500km from Abu Dhabi. The extent to which UAE residents felt the tremors was 4.0 in magnitude.” 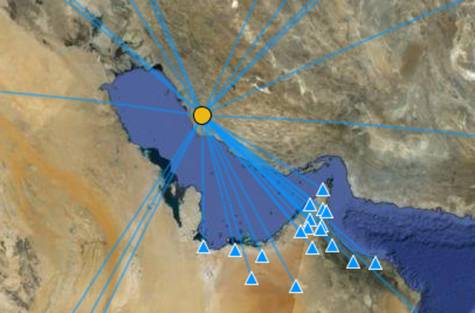 Earthquake epicentre was 153km in the south-west of Iranian city of Shiraz. Image: Gulf News

The epicentre of the quake was located some 280km in the north of Manama, Bahrain across the sea. It was some 10km deep, according to the US Geological Survey. The National Centre of Meteorology and Seismology (NCMS) said the earthquake’s epicentre was some 153km in the south-west of the Iranian city of Shiraz and some 500km in the north-west of Abu Dhabi.

The closest Iranian city to the earthquake centre is Bushehr, home to Iran’s only nuclear power plant. The area was devastated and latest reports indicate at least 37 people have died there in the earthquake and the aftershocks that follwed.


The jolts were also felt in neighbouring GCC countries including Bahrain, Qatar and parts of Saudi Arabia.