You are here: Home > UAE jolts from Pakistan earthquake tremor 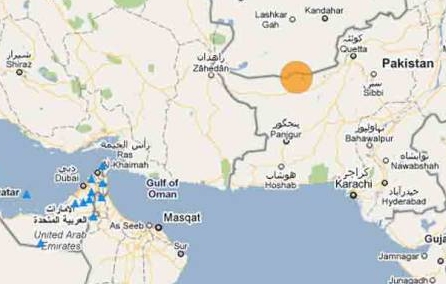 Strong tremors caused by a powerful earthquake in Pakistan were felt in most parts of the UAE at around 12:27am on Wednesday, sending waves of panic among people who rushed out of their homes.


Pakistan’s earthquake measuring 7.2 on the Richter scale struck some 566km in the northwest of Karachi, said the National Centre of Meteorology and Seismology.

The NCMS confirmed that the tremors were felt deep inside the UAE. In a report issued at 2:10am, the centre said it has caused no harm in the UAE.

The US Geological Survey said the quake was more than 84km underground, close to the town of Dalbandin in Baluchistan province, near the Afghan and Iranian frontiers.

The tremors were felt by people living even in Al Ain. Police and Civil Defence department has not reported any material damage or causalities.


The quake, however, sent a wave of panic among residents in Ras Al Khaimah, Fujairah, Sharjah, Ajman, Dubai, Al Ain, and parts of Abu Dhabi. Many of them rushed out into the open.