You are here: Home > Landmark Aladdin City to come up in Dubai – Khaleej Times

Landmark Aladdin City to come up in Dubai – Khaleej Times 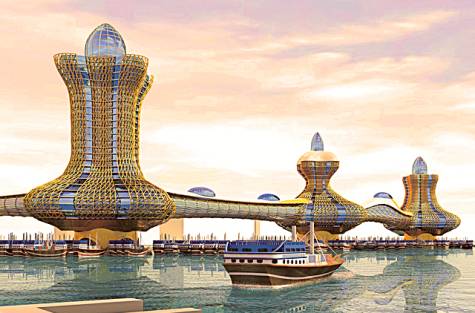 Dubai has announced a new landmark project named Aladdin City, the design of which has been inspired by the tales of Sindbad and Aladdin.


Aladdin City comprises three towers — a hotel and two commercial towers — built in the air space above the Dhow Wharfage in Dubai Creek between the Dubai Chamber of Commerce and Al Maktoum Bridge.The towers of different heights, which look akin to the magical lamp of Aladdin, are connected with a 450m-long pedestrian bridge with travelator, leading to parking stations away from the project site.

As per the conceptual design, the parking stations at the entrances on two sides of the project will have underground parking bays with their roofs designed as public parks.

As per the design, the three towers will be constructed above the tip of each wharf of the port at a total area of 120,000 sq.m. The highest tower with 34 floors will house a hotel. The tower in the middle and the third tower with 25 and 26 floors respectively will be occupied by offices and commercial establishments. A total of 900 parking spaces will be provided in two parking blocks at the entrance points.

Though the entry of visitors will be through the parking stations and the air-conditioned pedestrian bridges with travellators, the towers will have separate service lifts and emergency stairways that will be built in the middle of the roundabouts on the tip of the wharfs.

Aladdin City is located outside the heritage zone that is expected to enter the list of World Heritage Sites of Unesco.