You are here: Home > Shindagha tunnel to be replaced with a bridge

Shindagha tunnel to be replaced with a bridge 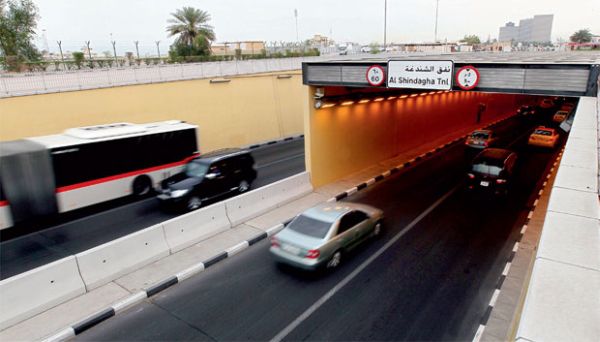 Shindagha tunnel, the second oldest crossing on Dubai Creek between Deira and Bur Dubai, is set to be replaced soon.

Gulf News reports that the iconic tunnel, which is around 40 years old, is set to be replaced by a multi-lane bridge in the next few years.

The crossing, one of the five across the Dubai Creek and the only one that links the two oldest business districts of Dubai, is regularly maintained but the maintenance is very expensive.

Currently, Shindagha Tunnel is one of the busiest crossings and we see a lot of traffic on both ends of the tunnel due to a bottleneck. A multi-lane bridge will solve the problem. Besides, it’s not easy to maintain the tunnel and it is very expensive. We considered various options, which included improving the tunnel and giving it a few more years. We also considered building another set of tunnels to replace the existing ones, but building the tunnels is three times more expensive than building a bridge.

The crossing is likely to have four to six lanes in each direction, which will get rid of the bottleneck that is currently seen in the vicinity.

Shindagha tunnel is currently one of the busiest crossings on the Creek with more than 110,000 vehicles plying through it daily. It acts as a vital link for the thousands of residents and business people who shuttle between the business districts of Al Ras and Bur Dubai several times daily.

Opened for traffic in 1975, Shindagha tunnel reflected Dubai’s passion for innovation from the early days.
The second and the shortest crossing between Bur Dubai and Al Ras, the tunnel was an immediate hit among motorists, who were earlier forced to take the only available Maktoum bridge.

One of the dream projects undertaken by Shaikh Rashid Bin Saeed Al Maktoum, the then Ruler of Dubai, the tunnel was designed by Sir William Halcrow and his team, who also worked on several other major projects in Dubai during the 1970s and 1980s.

The tunnel was constructed using cofferdams or sheet piling system, which required pumping the water out and carrying out the construction in the dry area.

Interestingly, Shindagha was the first underwater tunnel built not just in Dubai but in the entire region.
The tunnel underwent its first major reinforcement and maintenance work in 1985 following which a regular maintenance regime has been put in place, which involves routine, corrective and preventive work.


The previous major reinforcement works were done in 2004, 2006, 2008 and 2010, while RTA partially closed the tunnel earlier this month for routine maintenance.