You are here: Home > Monica Bellucci bares it all in Dubai

Monica Bellucci bares it all in Dubai 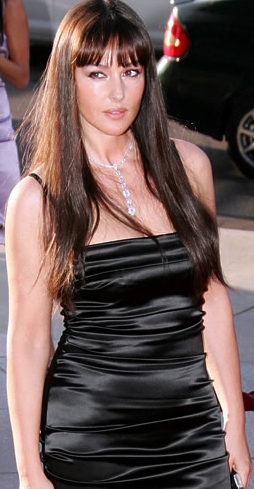 If there’s anything I can say about style, and those mornings when it just all seems to come together, it’s that there’s an element of luck to it.

You have to want it to work, of course, and work hard, which is why there are all these TV shows about getting it together and making looking good work.

And then you meet people like Monica Bellucci, who rock up in jeans and a shirt, look stunning, and admit, that yes, it’s all down to luck.

I can’t fault her for that, I can put in as many hours as I like at the gym and the beauty salon but there’s not much that will bring me close to Bellucci’s perfect combination of incredible skin (she’s 45 and strikingly wrinkle-free), throaty voice and carved-in-marble physique. It’s all a gift, she says.

When I meet Bellucci, who was in the UAE this weekend for the Cartier International Dubai Polo Challenge, she’s in the aforementioned shirt – a very nicely cut one, however – and high-waisted trousers, with little else to adorn her but a wedding band and a bit of eyeliner.

It’s an easy look that, she says, sums up her style. “I like things simple and feminine,” she says, and looking back on her red-carpet career, it’s true that she’s favoured gowns that, rather than making a style statement, celebrate her famous figure.

“My body’s already… shapey,” she says, stumbling to find the right word, and I believe she very nearly says “beautiful” before she checks herself. She’s not conceited, just accepting of the hand she’s been dealt – and thankful for it.

How long does it take you to get ready?
One hour! I like to be quick. It’s the same thing when I travel. I don’t have much luggage – one is enough.

Even when I travel with my baby [4-year-old-daughter, Deva], I have one bag for two.

How do you decide what you’ll wear on the red carpet?
I’m so close to Dolce & Gabbana and Dior. In 2003, I was mistress of ceremonies at the Cannes Film Festival, and I decided to wear Dior for the first time and got to meet John Galliano.

I love what he does, and I’m so wearing Dior tonight [at the Cartier store opening at Dubai Mall.]

But you have that long-standing relationship with Dolce & Gabbana…
I come from Italy, and we have all those incredible designers – Prada, Armani, Gucci – so sometimes it’s difficult to choose. But Dolce & Gabbana gave me my first runway show, and even if I’m not a model anymore and I do acting, we are still really close friends. That’s why very often I’ll wear D&G when I have an event.

Would you be such a glamorous dresser if you weren’t famous?
I think I’m a just a very feminine woman. If glamorous means respecting your femininity, then yes I’m glamorous, but no more than that. I’m not obsessed with fashion. I like fashion, but I’m not a fashion victim.

I like to play with styles and make my own style.

So what defines your style?
It’s incredible how the way you choose to dress is about emotion. For example, today, my hairstylist suggested I wear a tiny little black dress for an event. I just don’t feel like it. To dress that way, you to have to want to be on show.

When you push your femininity like that, you are responsible for it and you have to play the game – and the game it can be so tiring.

Your next film, The Private Lives of Pippa Lee, has an incredible roster of female talent, including Robin Wright Penn, Winona Ryder and the director, Rebecca Miller. Was that a new experience?

I don’t have the chance to work with a female director very often, but Rebecca Miller is great – she knows exactly what she wants. When you work with women it’s very interesting, because between women there’s a complicity that comes out right away. You get straight to the point. Men sometimes just stop at the physique. Can I say that?

Pippa Lee is about a woman facing new challenges as she reaches 50. You’re 45. Are you hitting challenges in the roles you’re given?

I just think that growing up is such a beautiful thing. I am getting better roles. I’m lucky that I’m working and I don’t feel ageing is making my career more difficult – for now. But it’s not just about work. It’s also me as a person growing up – it’s great.

You’re actually happy about ageing?
I feel much more happy today than when I was 20. When I was a young woman, I didn’t know what I could be – you have this anxious feeling. Today, I feel at more peace with myself. Maybe it’s because I was so lucky to have a great husband and baby. To become a mother is the most incredible experience. Even the most incredible work cannot give the same excitement. I needed to go through that to feel comfortable.

What will you tell your daughter about fame?
She doesn’t need to be in the public eye because I protect her. If she wants to, it’s because she chooses. If she wants to become an actor I won’t say no, because I can’t say, I can and you can’t. If her passion is to become an actor, I have nothing against that. But I hope she’s going to do something else. It’s such a difficult work.

Of course you’re being judged all the time.
If you think about that, you won’t work any more. I was on the jury in Cannes two years ago. It was amazing, but it was the kind of experience that I won’t do again, because it’s not my job to give votes. Not to others and not to myself. What is important are the films. I was in Brazil for Christmas and it’s incredible how many people stopped me and said “I love Malèna”. I was in Spain and people were like, “I loved Irreversible, I loved the Passion of the Christ.” That’s what it all means. People remember you for a movie.

Do you judge your own work?
To see if a film is really good is to see what happens a few years later. Sometimes there are good films that really stay forever. I saw a film of mine a year ago – and it was a film made four years ago – and I thought, “this film is so old, And when it came out it was so successful.

So do you watch the films you’ve made?
I just was in a hotel and turned on the TV and boom! there was my movie. But you want to have a distance from your image. If you get involved too much you can see how actresses become… [shakes her head sadly].

You’ve been married to Vincent Cassel for 10 years and together for 14. For a celebrity couple that’s something of a record.

I’d say 14 years of life together – because marriage is just a piece of paper – is a miracle. I didn’t know anything about it. I just keep living everyday with the feeling that I know that this could finish one day. Right now, it keeps working.

Cassel has recently wrapped the longest film shoot in French movie history. Does being apart so much affect your relationship?
Maybe this is one of the secrets. Sometimes it’s not easy, but this is the way we live. When I met him I was already an actress and he was already an actor. He was a young boy, just 28, and today he is a man. I like the man he is today. I like the man he has become. I love who he is. I love the way he works and I love him as a father.

Do you plan to have another child?
I gave so much to my daughter. I was breast feeding for 9 months and I didn’t sleep for two years. I was so tired and I knew if I was going to have another, it needed to be soon after, but I needed to rejuvenate myself.

If another child comes I’m going to be happy. But I’m already happy.

What makes life so happy?
Without a good private life, life is nothing. When you’re 20, it’s about discovering who you are. I needed to travel. I was so curious – I still am – but everything was about discovering myself through others. It’s so important because you need to know who you are and what you need. But today my private life is so important.


And I’m never going to sacrifice that for my work. That’s why growing up is such a beautiful thing, if you have the chance to grow up in the right way.