You are here: Home > Offering car lift to strangers in Dubai is a criminal offense with hefty fines

By Dubai Expat Blog on April 8, 2013 in Dubai Transport, Living in Dubai

Do not feel pity if you are driving by a stranger walking under the harsh sun of Dubai. Your act of kindness may land you in trouble as RTA considers offering car lift to strangers a criminal offense with a hefty fine as well as confiscation of driving license and car documents.

Offering car lift to strangers is considered as illegal car pooling or illegal passenger transfer – violation that carries a fine of Dhs 4,000. The fine is increased to Dh5,000 if not paid within 15 days.

RTA has no logical method to determine if a passenger sitting in a car is illegal passenger or not.

Illegal Taxis are defined in Dubai as the vehicles that are being used to transport people, without having a license for that. This is definition serves as a double edged sword, because while it identifies illegal taxis it also puts a red line on car-lift and car-pool services.

Gulf News had inquired Furat Al Amiri, a senior RTA official, how inspectors check if the violation is genuine.

“Inspectors check the relation between the drivers and passengers. If there is a relation — friends, neighbours or colleagues — then the fine is not issued,” 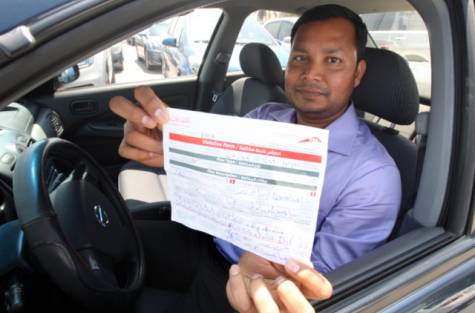 According to Gulf News, Samson Fernandez, an Indian marketing manager, claimed that he was trapped by the RTA inspector. He said that last month he was fined Dh4,000 for “illegal passenger transfer,” but he denies any wrongdoing.

He claims that he had pulled over next to the metro stop near Ibn Battuta mall to ask directions to Parco accommodation area. He was asking around when a man from south India said he would take him there as he knew the way. He got into Mr. Samson’s car and offered him Dh25 – which he refused. Just then a plainclothes RTA officer showed up and asked the man to step out.

The officer asked him if Mr. Samson had demanded any money. The guy said ‘yes’ and Samson was fined. His his driving licence and car registration were also confiscated.

Fernandez said that he visited the RTA centre in Al Muhaisnah where he filed a complaint.

“I was told my case will be reviewed but it’ll take some time. I don’t understand what’s my fault in all this – is it illegal to ask for directions? Is it your fault if someone helps themselves into your car to talk to you?”