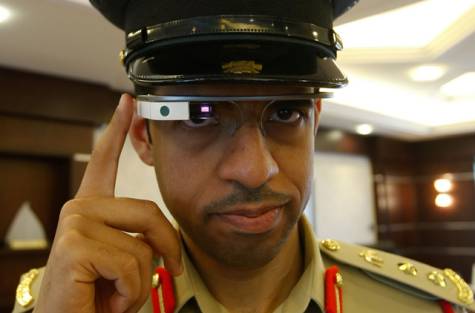 The smart eyewear is currently under trial by Dubai Police Smart Services Department, for use by traffic police.

Google Glass is a small computer mounted onto glasses. It can take photos, record video, access the internet and give directions among other uses. It is compatible with both Android and iOS.

According to Google, It has a high-resolution display that is the equivalent of a 63.5cm high-definition screen from 2.4 metres away. The glasses feature a 5 megapixel camera.

Dubai Police’s Smart Services teams have created two applications to be used by their officers. One will allow them to take photos of traffic violations from the Glass, which will go instantly into their system, and the other application helps identify wanted cars.

Taking photos using Dubai Police’s Google Glass’ program is simple. The officer just needs to tap the side of the glass and the photo, in addition to the exact location, time and date is automatically sent to the system.

As for determining whether a car is wanted or not,  all the officer needs to do is look at number plates and the Glass will cross-reference the plates with the traffic department’s wanted vehicles database and alert him if any vehicle is wanted.

Both programs were developed by an in-house team from the Dubai Police smart services.