By Dubai Expat Blog on September 4, 2019 in Dubai Transport, Living in Dubai 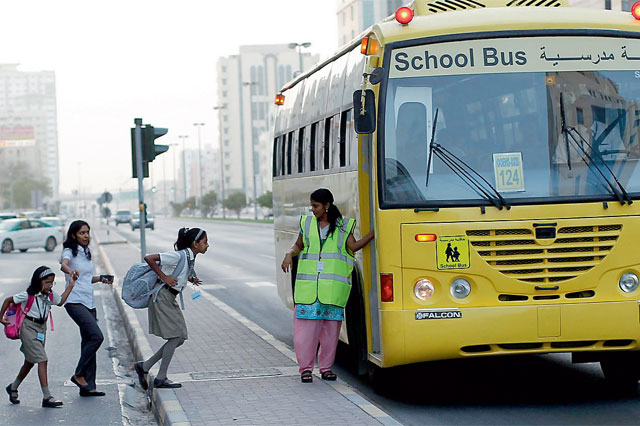 Dubai Police has urged drivers not to overtake other vehicles or change lanes when in schools zones or at crosswalks.

Authorities also called on bus drivers and parents to slow down and be careful when entering and exiting school zones. Motorists were cautioned to give way to school buses, allow pupils the right of way at zebra crossings and to not speed in school zones, otherwise, irresponsible motorists may face fines or black points.

Dear motorists: Do not overtake other vehicles or change lanes when in schools zones or at crosswalks.#DubaiPolice#YourSecurityOurHappiness#SmartSecureTogether#DPAwareness

The warning was issued during the first week of the new academic term after pupils returned to school after the long summer break.

As part of the year-long traffic safety campaign to protect the lives of pupils, the Roads and Transport Authority (RTA) has rolled out a number of ‘smart’ signs across Dubai that are aimed at getting motorists to slow down when driving near a school.

The signs are fitted with digital screens that display a passing car’s speed, along with a corresponding emoticon that is either smiling or frowning depending on whether or not the speed limit is adhered to.

The legal limit in a school zone in Dubai is 40 kilometers per hour, and the signs will flash a warning in both English and Arabic for drivers to slow down if they exceed it. A simple ‘Thank You’ message will be displayed if they are under.

Failure to follow the stop sign of school buses will lead to a Dh1,000 fine and 10 black points, according to the UAE’s Federal Traffic Law, which came into effect on July 1, 2017. The law also includes a fine of Dh500 and 6 black points against school bus drivers who fail to open the stop sign.

To avoid the fine, drivers are required by law to maintain a distance of not less than five metres, in order to ensure the safety of students.

Parents are urged to accompany children when they embark or disembark from school buses and when they cross roads. Drivers should be extra vigilant around schools, hospitals, and residential areas and to always maintain safe distance between vehicles.

All children under the age of 10 should sit in the back seats of the vehicles and stop the vehicle near the pedestrian crossing so they can cross safely, but not too close that it blocks the area. Vehicles should also park at least 10 steps away from the bus zone.

Police patrol units had been specially trained to ensure smooth traffic flow, especially in front of school entrances, ensuring that children could enter and exit safely.

Schools were urged to provide separate entrances, one for buses and one for private vehicles, to make sure the children are out of harm’s way and traffic is not obstructed.

In a recent move, Abu Dhabi Police announced that all school buses in the emirate will soon be fitted with cameras behind their stop signs to ensure fellow motorists stop when children cross the road. Hopefully, Dubai will follow suit soon.

Safety of a child on the road is our common responsibility. Whether you are a parent picking or dropping your child to school, or a fellow commuter on the road, make sure your are extra vigilant when there’s a school or school bus nearby.


Image is used for illustrative purposes only