You are here: Home > Dubai Metro set for massive expansion

By Dubai Expat Blog on September 10, 2013 in Living in Dubai 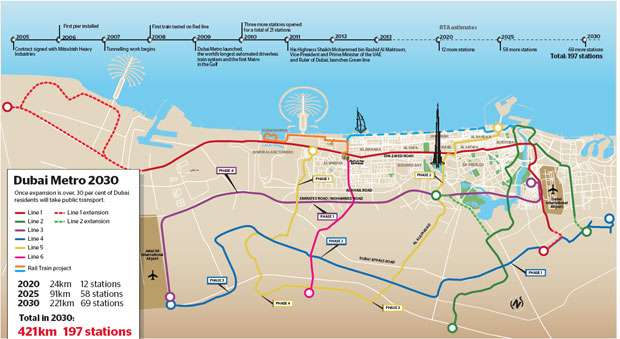 Dubai Metro will see a massive expansion on both Red and Green Lines with work expected to begin as early as next year.


The Roads and Transport Authority (RTA) has finalised plans to extend the Red Line from Rashidiya to Mirdif, to go with its earlier plan to extend the Green Line from Al Jaddaf to Academic City. Both extensions are expected to be operational before 2020.

Although the areas both routes will cover have been decided, the exact routes and the number of stations will be planned next year, when work on the design of the projects will begin.

The extensions are being planned bearing in mind the growing demand and popularity of the metro system as well as the continuous expansion of residential and industrial clusters across the length and breadth of Dubai. The plan also keeps in mind the growing population of the emirate which is estimated to cross the three million mark by 2020.

Both extensions are expected to add a substantial distance to the rail network, with the Green Line extending by up to 24 kilometres and the Red Line by around 12 kilometres.

The Red Line extension will serve booming new communities such as Shurooq and Ghuroob in Mirdif along with the adjoining neighbourhoods Al Mizhar and Al Warqa.

However, it is the Green Line extension that is likely to offer mass transit connectivity to large residential and industrial clusters as it will pass through Ras Al Khor Industrial Area, the heavily populated International City as well as residential and educational clusters such as Silicon Oasis and Academic City, serving a huge number of students.

The RTA’s rail master plan also includes a rail network extension of up to 400 kilometres by 2030, when the population of the emirate is estimated to cross six million. It involves the proposed construction of at least four other lines.

The news of the expansion comes as Dubai Metro celebrates four years of its successful operations, with its popularity growing every day.

Dubai Metro, which began operations on September 9, 2009, is the world’s largest driverless rail network extending up to 75 kilometres.