You are here: Home > After ID Cards for Expats, Animals to be tagged for more milk and meat 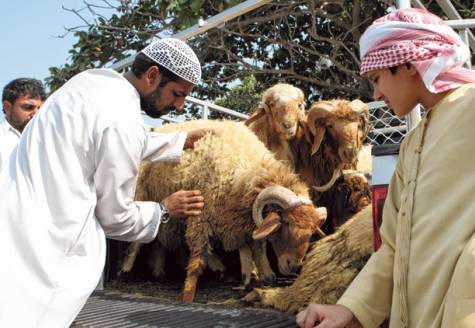 After tagging expat residents by means of Emirates ID Cards, animals of UAE are going to be tagged next, for more milk and meat.

The authority, which is responsible for agriculture and animal welfare in the emirate, began the two-year, Dh40 million project in October.

The plan is to register an estimated 2.72 million animals in the emirate, which constitute 80 per cent of the animal population in the UAE, two senior ADFCA officials said at a media roundtable yesterday.

The system, developed from the popular “Stable to the Table” food safety norm, involves tagging each animal.

This will be in a bid to help control animal diseases and improve animal health, the officials said.

An ear tag is attached to the right ear of sheep and goats, but in camels a microchip is inserted under the skin of the left side of the neck.

It is free of charge for the animal’s owner, and it does not affect the animal’s health, productivity or performance, the officials said. By December 19, ADFCA had tagged around 528,485 animals on 6,238 farms, they said.

The AIRS team will register the name of the owner, his or her identity number and the animal’s serial number on a mobile electronic device and send it to ADFCA headquarters for processing.

The tagging of animals will help the massive vaccination drive for all animals in the emirate as the tag contains the history of an animal.

The tag will ensure the competent authorities to take prompt action in the case of outbreak of a disease.


Authorities can track the movement of animals from one farm to the other as part of controlling infectious diseases. “The owners have to fill out a form and submit it to authorities for this purpose,” the officials said.