You are here: Home > From Sonapur to the Mosques in Deira – story of UAE’s Largest Iftar Kitchen in Dubai 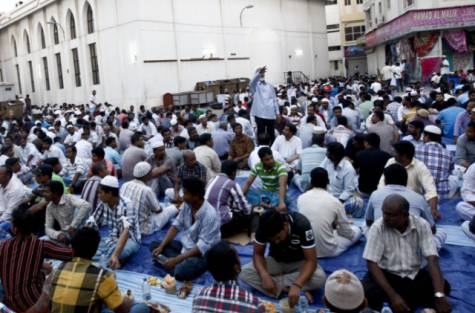 Ramadan, a month full of giving, generosity and care. This notion comes to life when we witness the Iftar at Ali Rashid Lootah mosque near Naif Gold Souq in Deira, Dubai. This iftaar, that is walk-in for anybody regardless of caste, color and greed is organized and prepared by IMAN Cultural Centre for the past 35 years. The organization aims at providing Iftaar to most blue collar people who can break their fast with a good nutritious meal and also pack it for their families back home.

A typical day for the volunteers and workers behind this grand iftaar begins at 11am under the scorching sun of Ramadan. A group of eight chefs along with a few dozen helpers race against time to garnish 10 giant pots full of simmering mutton porridge, also known as Kanji.

Beyond the shimmering tall towers of Dubai lies a little community area called “Sonapur”. This area is mostly inhabited by Pakistani, Indians who are blue collar workers employed at very low wages and usually work in the development sector of UAE.

Ali, who has been at the helm of this community service since the start told XPRESS that they are safely serving the biggest iftaar in the UAE.

Inside the kitchen near the RTA bus depot in Sonapur, the chefs and another 50-odd helpers get together to cook, pack, load and offload the food — all in a day’s work, starting at 5am.

Badshah, 39, who is a cook in the same labor camp kitchen said that this has pretty much been his schedule for the last 10 years during Ramadan. He hardly slept but then is also content that it is for a great cause.

During Ramadan, Badshah happily does a double-shift, preparing kanji that uses almost 150kg of basmati rice and 60kg of Indian mutton daily.

Badshah added that they don’t do it for the money but are suitable rewarded. For him, the greatest satisfaction is to see thousands of people ending their fast with that he cooks. Badshah looked visibly tired, sitting on his chair, awake since 4am only after a few hours of sleep.

His Ramadan shift is ends at around 3pm but work continues for other volunteers who join a little later. At about 3.30pm they rustle up plastic bags with amazing alacrity and pack the food in boxes.

Meanwhile, dates in 500 cartons, each weighing 10kg, are already stacked at the mosque also known as the Kuwaiti masjid.

The porridge, however, remains the main attraction for over 100,000 faithful’s who visit this mosque during the month of Ramadan for iftar.

Apart from the Ali Rashid Lootah mosque, IMAN arranges tents at several other locations as well to facilitate as many people as possible. These locations are,

Ali, who always has a smile on his face, said that Kanji is a traditional porridge that hails from Tamil Nadu in India where most of them hail from and is central to their Iftaar every Ramadan since this service begun.

He added that they are the only ones serving Kanji. Ali said that the fennel helps cool down a person’s body after a hot day of fasting. Other services mostly serve Biryani, he added.

The 59 year old finance executive turned businessman stated that they started in 1979 with 500 meals for the first three years during Ramadan. However, the number has picked up and it now stands at 4,000 meals every day for decades with additional 1000 packets for nearby masjids.

Mohammad Thaha, joint secretary and iftar team leader says that there are 65-odd people who do everything from start to finish in a structured manner every day.

By 4pm, Thaha goes to the Ali Rashid Lootah mosque and oversees the offloading of the food packets by forklift.

In an hour’s time, volunteers join hands and prepare for the thousands expected to line up for iftar in the next two hours.

Thaha added that the people from different countries and different walks of life working there in Dubai participate and make this iftar truly global. They make sure that everyone who comes even at the last minute gets a place to sit and partake in iftar.


Thaha stands right because even if someone arrives at the last minute before Iftaar, they will never be disappointed.