You are here: Home > Fire and Fireworks: Dubai welcomes New Year with a blaze

By Dubai Expat Blog on January 1, 2016 in Living in Dubai 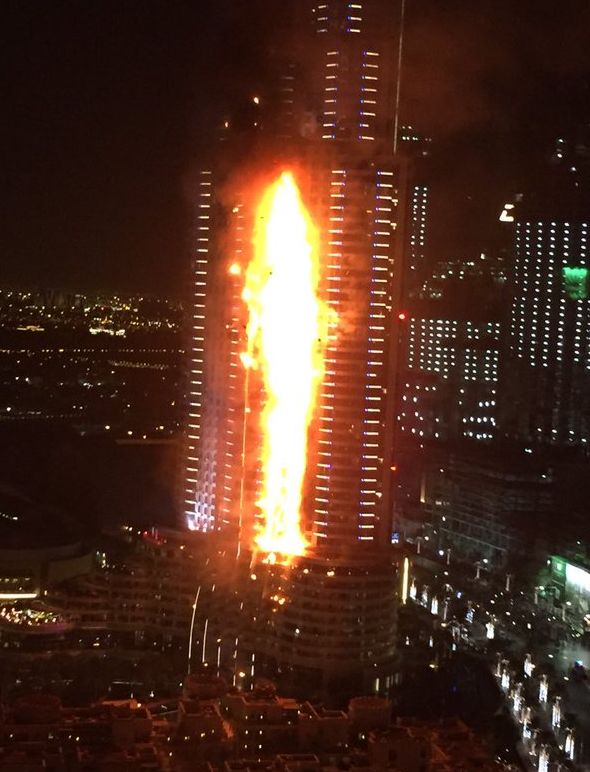 Dubai stepped into the year with fire and fireworks. As thousands of Dubai residents and tourists were gathering around Burj Khalifa to view the spectacular fireworks, they were greeted by an blazing inferno as fire erupted at The Address hotel at Downtown Dubai.

I'm next to The Address in Dubai where a sudden fire enveloped the building. Started from a terrace & raced up. pic.twitter.com/p8OWF6NIW5

This is happening in Dubai right now! We hope everyone is safe ?? pic.twitter.com/zeziHJNQMy

The fire spread quickly on the outside of the building, possibly due to cladding made of white paint, aluminum, and insulation—the slick patina that’s come to define Dubai architecture, which is also highly combustible in dry, desert air.

The firefighters and civil defense personnel were quickly on the spot and evacuations begin immediately. About fourteen people were injured but fortunately there was no casualty – a miracle considering the severity of fire and number of people present inside the building.

There were some disrespectful idiots who took the fire at the Address as an opportunity to take selfies.

Dubai residents opened their doors to those affected by the fire at the Address hotel. A hashtag #NeedAnAddress was started shortly after the fire broke out, with Twitter users offering spare beds and sofas to those evacuated from the area.

Auris Hotels, which has several properties in Dubai, tweeted that it had 30 rooms available in the TECOM area of the city. Dubai Department of Tourism & Commerce Marketing said it was working to provide guests evacuated from Downtown Address hotel with alternative hotel accommodation.

Despite the fire and panic, the annual fireworks at Burj Khalifa proceeded as per schedule.

Welcome to 2016. Hope the year bring more prosperity to Dubai.