By Dubai Expat Blog on July 14, 2018 in Dubai Transport, Living in Dubai

The residents of the Dubai International City (DIC) have finally taken a collective sigh of relief as their traffic worries have finally come to an end as two flyovers, giving direct entry and exit to and from the densely populated locality, have been opened up for public commute.

Currently, the exits and entries to the sprawling neighbourhood, especially during the morning and evening peak hours, are clogged leaving commuters gasping for space.

Out of the two flyovers, one leading into DIC from Al Awir road heading from the direction of Hatta and the other exiting from DIC towards Downtown Dubai.

The flyovers, with a capacity of 1,000 vehicles per hour, are expected to make a huge difference to the traffic movement in the area. 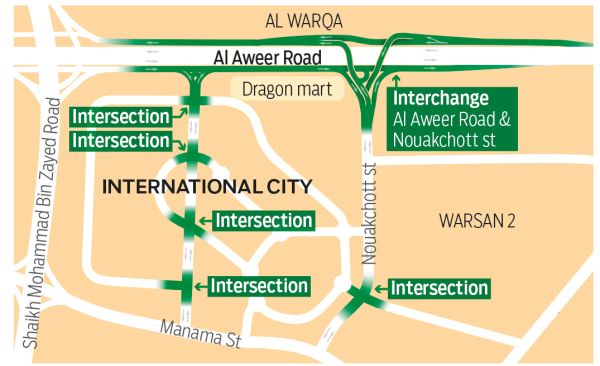 The opening of Al Awir Road Improvement Project (Phase I) will contribute to the smooth flow of traffic from International City heading to Downtown Dubai. It included the construction of a bridge with an estimated capacity of 1,000 vehicles per hour, which will ease the traffic pressure on the roundabout at the junction of Al Awir and Shaikh Zayed Bin Hamdan Al Nahyan streets. It will be easy for motorists coming from Hatta to access the Dragon Mart and the International City via Al Awir Road.

The project also includes the construction of an interchange in the form of a two-lane flyover from Warsan (1) Street to Al Awir Road westward in the direction of Dubai Downtown.