You are here: Home > Emirati attacking an Indian driver in Dubai caught on YouTube

Emirati attacking an Indian driver in Dubai caught on YouTube 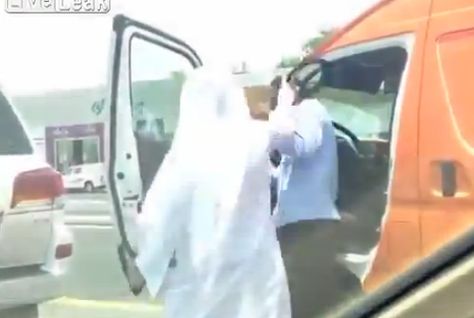 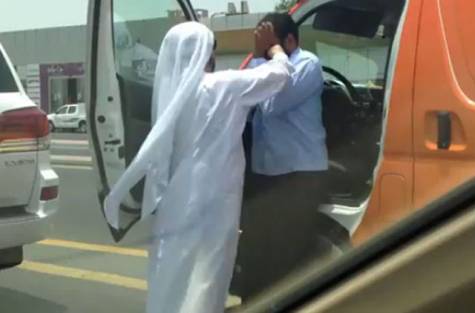 In a youtube video that shocked the audience, especially the expat resident community in the UAE, an Emirati official is seen physically abusing a driver of Indian origin at a Dubai road.

A shocking video appeared to show an Emirati man attacking an Indian national following a minor traffic incident in Dubai.

In the clip, posted on YouTube, the unidentified UAE national appeared to physically assault the other driver several times, before other motorists intervened.

The video can be seen here

The footage was filmed on another driver’s mobile phone and provoked outrage when posted online later.

According to local newspaper Emarat Al Youm, an Emirati national was arrested following the incident.

On the flip side, the family of a senior UAE official arrested for physically assaulting an Indian motorist have reportedly filed a case against the man who filmed the incident and uploaded it to YouTube.

Under the UAE’s cybercrime laws, recording videos in public without the permission of those being filmed is illegal and constitutes defamation. (from Arabian Business)

The Emirati, if charged, is expected to be prosecuted before the Dubai Misdemeanor Court. The Penal Code’s article 339 stipulates that a suspect faces up to a year in jail and a maximum fine of Dh10,000 if he/she beats a victim without causing injuries that prevent him/her from carrying out his duties for up to 20 days.

According to another update, Dubai Police has identified and arrested the guy who uploaded the video of Emirati attacking the Indian driver. He is said to have violated the privacy of the person by recording his video without permission, which is an offense under UAE cybercrime law. Imagine the guy walking to the abuser and asking him “Sir, can I have your permission to capture your abusive act and make a video of you abusing this poor Indian guy?”


The lesson for the whistleblowers here is that if you have seen anything unjust happening around you and want to report it to the world, please keep your identity covered.