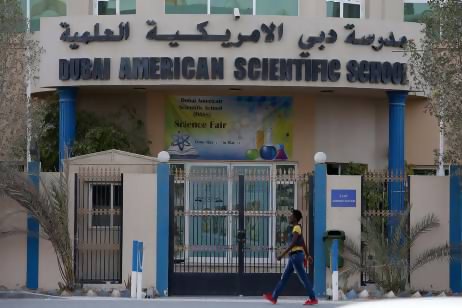 The Dubai American Scientific School in Al Quoz is closed by the Knowledge and Human Development Authority for knife-wielding pupils, unlicensed teachers and charging double fees.

The Dubai American Scientific School failed seven consecutive inspections by the education regulator, the Knowledge and Human Development Authority. On one occasion a fight broke out among pupils, one of them carrying a knife, while inspectors were in the school.

It will not reopen in September after the summer break, and all 251 remaining pupils have been guaranteed places elsewhere.

The Dubai American Scientific School has been in trouble since last August, when the KHDA ordered it to stop enrolling pupils.

The safety of pupils, attendance rates and teaching quality were all rated unsatisfactory during inspections.
Among the health and safety offences reported were incidents of fighting between the children, including a case where a child brought a knife to school. The case came to light because inspectors from the KHDA were at the school when the fight broke out.

Another case involving a fight between a teacher and pupil was reported to police.

The school had also employed 20 teachers without a formal contract or offer of employment, and without approval from KHDA or the Ministry of Labour.

When the school’s management ignored the August order and enrolled 125 pupils in September, the KHDA suspended its licence.

In September, when the school realised the seriousness of the KHDA’s demands for improvement, it ordered parents to keep their children home for several days so it could update security systems, including CCTV cameras.

The school’s management claimed this was a requirement outlined in a US consulate notification about “the political climate in the Middle East” following anti-US protests provoked by a YouTube video mocking the Prophet Mohammed.

The move served only to lengthen their list of offences as suspending classes and installing cameras both require permission from KHDA, which the school did not obtain.

Administrators were also found to have charged some parents more than twice the approved amount in fees. The KHDA said it found some parents had paid Dh49,500 when the school had permission to charge only Dh24,000.

The KHDA said no fees had been paid by any parents for the next school year.

More than 30 pupils were absent from classes for extended periods without authorisation. The KHDA said some children missed as many as 76 days without the school taking any measures.

According to regulations in Dubai, any child who misses more than 21 days of school without a valid reason should be expelled.

“We consider parents play a key role in their child’s education and will continue to support parents with children at Dubai American Scientific School to find the best alternative solution,” said Amal Belhasa, head of compliance and resolution at the regulator.

“The KHDA is keen to ensure all children have the right to a quality education and we expect all schools and parents to adhere to the guidelines set out in the new parent-school contracts.”