By Dubai Expat Blog on August 4, 2013 in Dubai Technology 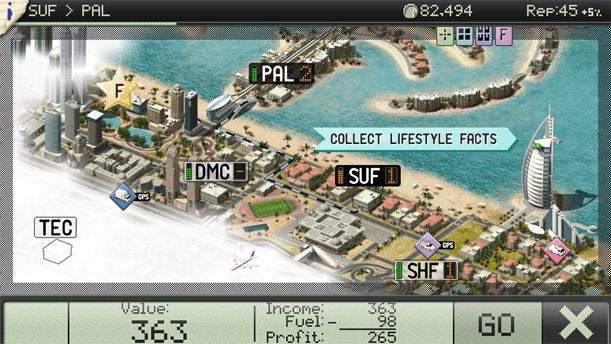 A local group has developed a smartphone game featuring Dubai – including landmarks such as the Burj Khalifa – and offering insights into the city’s history and lifestyle.

The game, “Dubai Delivery”, is the first cultural logistics game based in the city and it allows people to manage a delivery service using a digital 3D map.

There are descriptions for most districts and players can read information about areas such as Bur Dubai, Al Karama and Umm Suqeim.

The developers, three Hungarian men who are running an interactive production studio creating digital experiences, created the game to prove that original content can be produced locally and to present a different view of the city.

“The day-to-day operations of our small start-up company sparked the idea,” said Peter Saghegyi, the managing director of Sentiomedia.

“Agencies come to us often to copy an idea for them they saw overseas. We wanted to show that original content can be created in the region, the talent is already here but they don’t have the opportunity to utilise it.

“We spent six months on this game living on our savings, because we didn’t want any investor influence on the creative process.

“Apart from creating a great gaming experience, the goal was to refine the perception of Dubai globally. We tried to portray the diverse communities of Dubai, all of which are a vital part of the city but they hardly receive any coverage in worldwide media.”

The developers said their game differed from other city guides because it featured a puzzle embedded in a cultural representation of a real city.

The game, which is for iPhone and iPod Touch, is free at the App Store.

Players can collect 300 historical and lifestyle facts revealed by Dubai residents of 15 nationalities.

“There are also about 150 history facts about Dubai and UAE, starting from 4000 BC up until today,” said Mr Saghegyi. “The other 150 facts are fun facts written by us and our friends. We tried showing the uncomfortable things in the city in a fun way without offending anyone.”