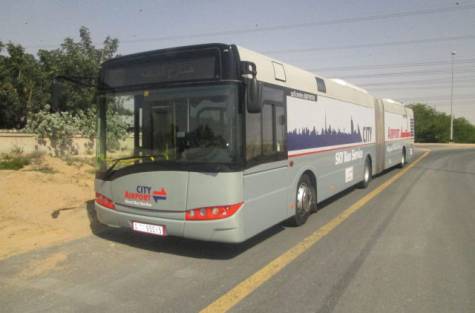 Passengers at Dubai International Airport can now avail of comfortable bus rides to and from their hotels as the Roads and Transport Authority (RTA) launches the Sky Bus service.

Launched as a pilot project for six months, the Sky Bus service will offer direct connectivity to 26 hotels across the city, operated through eight buses on four routes. The service will initially start from Terminal 3 and then Terminal 1 at Dubai International Airport.

The service was launched following a detailed survey that took into account views of more than 1,500 tourists.

The Sky Bus shuttle service will cost Dh15 per head for every trip, which will include free WiFi service on the move. Payment of fare for the bus trips will be done through Nol cards which can be bought at RTA information kiosks at the airport.

The buses will operate every 30 minutes from the airport. However, if the demand is high, the frequency will be increased. The buses will start operations every day from noon until late at night.

Passengers will also be able to enjoy light snacks and juices on the bus as Sky Bus will also offer a catering service.

Special articulated buses have been deployed for the buses with large baggage spaces allocated on every bus for passengers.

Have you travelled through Sky Bus shuttle service? Share your comments and feedback.

Have you travelled through Sky Bus shuttle service to and from #Dubai Airports?