By Dubai Expat Blog on May 3, 2018 in Dubai Transport, Living in Dubai

A tunnel on both sides of Shaikh Rashid Street (Al Garhoud and Mina Rashid) comprising four lanes in each direction is now open for public use.

Early February this year, RTA opened two major bridges, one on Shaikh Khalifa Bin Zayed Street comprising two lanes in each direction, and the other was a one-lane bridge stretching from Zabeel Street to the direction of Shaikh Rashid Street. 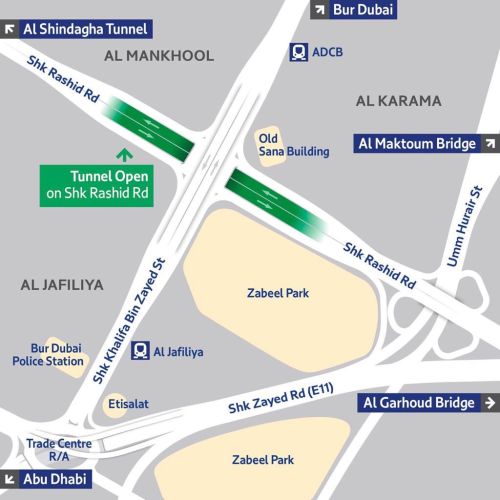 It also includes the construction of another single-lane ramp stretching from Zabeel Street and heading to Shaikh Rashid Street.

It also entails the construction of a tunnel of four lanes in each direction on the Shaikh Rashid Street in the direction of the intersection with Al Mankhool Street, and a signalised junction under the bridge to provide free turns from main roads to subsidiary roads. It also includes lighting, pavement, irrigation, sewage, storm-water drainage works as well as the shifting and protecting utility lines such as electricity, water and telecommunication.