The bus stop at Dubai Trade Centre roundabout has been shifted close to Al Jaffiliya Metro station due to “safety reasons”, announced by the Roads and Transport Authority (RTA). 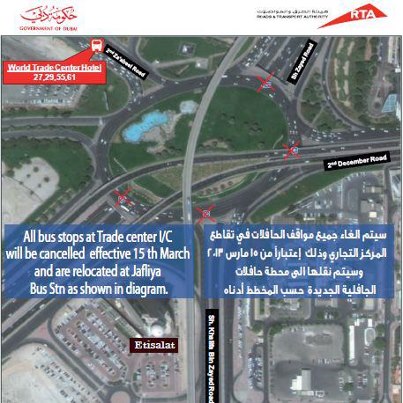 Gulf News reported that Dubai Trade Centre roundabout bus stop, which marks a vital point on at least a dozen bus routes, is closed from Friday March 15 and all public transport buses with halts there will be diverted to Al Jaffiliya stop.

The RTA’s move comes close on the heels of a couple of accidents near the stop involving buses, which raised concerns about safety and traffic chaos around the stop. The existing bus stops are located right on the Trade Centre roundabout and they not only create a traffic bottleneck but also present safety issues as commuters have to cross the roads at the roundabout to reach the bus stops.

The RTA inspectors have already started distributing pamphlets to commuters at the existing bus stops to make them aware about the new bus stop.

Dubai commuters are not happy over closure of Dubai Trade Center bus stop.

“I understand that there was growing concern of safety at the Dubai Trade Centre roundabout but walking to Jaffiliya will be a bit difficult during summer as I already trudge 500 metres to reach the roundabout,”


How do you feel about the relocation of Dubai Trade Centre bus stop to Al Jaffiliya? do share your feedback.