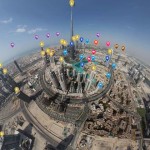 By Dubai Expat Blog on January 19, 2015 in Dubai Technology, Living in Dubai

Dubai 360 has launched the first online interactive city tour of Dubai with nearly 1,300 pieces of panoramic video and photo content. Dubai 360 officially launched www.Dubai360.com which allows viewers to explore every angle of the city from the comfort of their own home. Having already given internet users a glimpse of what was to […]