Dubai Government and RTA are always working to ease traffic congestion and making the Emirates more environment friendly. The latest announcement about a European style Bike Sharing in Dubai is another step in right direction. 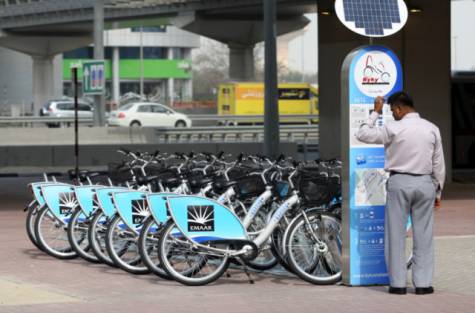 The novel scheme has been rolled out by Nextbike, the German-based company which operates about 15,000 bikes across Europe.

Though no rates have been announced yet, over 100 bicycles have been seen stationed near two Metro stations — Burj Khalifa and Marina, besides neighbouring areas where tourists congregate.

The fare for bikes rental is not disclosed yet. However, in Germany, a one-hour bike rental costs €1 (around Dh5), while a 24-hour-rental costs €8.

Nextbike is the largest international bike-sharing network. It is present in more than 30 German cities besides Austria, Latvia, Poland, Switzerland, Turkey, Azerbaijan, Cyprus and New Zealand.

According to the company’s website, users must register on the site, which allows them to rent bikes at every location.

Payments can be done via credit card or direct debit on three payment networks (Visa, MasterCard and Amex).

Members can rent a Nextbike in cities where they are present via the hotline, app or customer card.

The rent and return of the bikes is possible by phone on 800 3330, online, via smartphone app or at one of the rental terminals.

How Bike Riding in Dubai will work:

Every bike station has a solar-powered console where customers can place their prepaid membership card.

1. Place customer card in front of the sensor or enter your phone number

2. Read the code, open the combination lock at the bike

3. Drag the bike from the rack and use

4. Return the bike to the rack until it is locked automatically (an acoustic signal indicates successful return; if there’s no signal user must confirm the return at the terminal)

5. Close the combination lock on the bike

Bike riding is definitely a viable option for commuters who do not have to travel for longer distance so they don’t want to get into expensive taxis or walk around for the Metro.