You are here: Home > Pedways 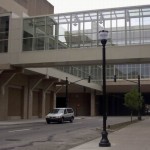 By Dubai Expat Blog on December 21, 2009 in Dubai Transport, Living in Dubai

Government of Dubai is now planning to build climate controlled pedways to link major buildings to promote a walking culture. Thse pedways will link major buildings, shopping centres, Metro stations and bus stations. According to the RTA’s statistics, 49 pedestrians were killed on Dubai’s roads in 2001 and in 2007 the figure was 145. However, […]