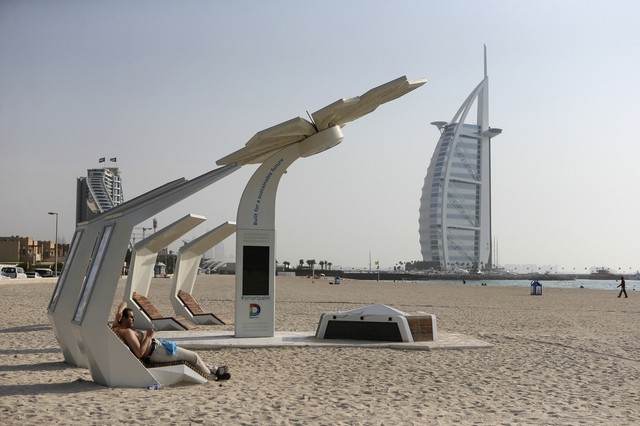 Great news for the tech savvy in Dubai. Newly installed smart palms in parks and beaches are not only providing shade but also acting as free wifi hotspots.

The six-metre-tall artificial trees are solar powered and offer recharging for mobile phones and other gadgets, as well as weather forecasts, news and information about Dubai.

So far they have been installed at Zabeel Park and at the beach near Burj Al Arab, but there are plans to expand them to all public beaches in the emirate.

The smart palms are shaped like date palm trees and provide real-time data on the number of internet users and devices charged via the company’s website.

On average about 260 people use the wifi service, which has a range of 53 metres, each day, with 31 devices recharged daily.

Information display screens installed in the “trunk” of the trees can be used for public messages, government notices and advertisements.

“Seating areas are available next to each palm for resting and relaxation during the battery-recharging process, as well as for internet browsing via the wifi access,” said the company behind the palms, D Idea Media.

The charging stations are more powerful than standard chargers and the company claims they can recharge batteries two-and-a-half times faster. Users can also interact with a touchscreen pad that provides multilingual information and there’s an emergency button, if needed.

More of the palms are expected to be installed at Al Mamzar Park, Dubai Creek Park and Al Barsha Pond Park.