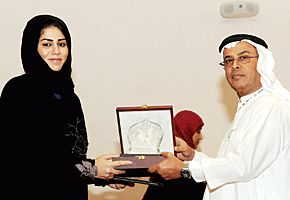 Lt Salma Al Kaabi is the first Emirati female dog trainer. She is a shining example of an Emirati woman who has broken social barriers and joined police in the UAE.

Salma Al Kaabi is the first national woman to become an official dog trainer. Lt Salma surprised a packed hall when she presented a police dog training demonstration at a seminar held in Ras Al Khaimah this week to mark the international Women’s Day.


Lt. Salma’s dream was to join the UAE police as she had not first thought to be a dog trainer. She was first appointed at airport security in Abu Dhabi before she was moved to the eastern oasis town of Al Ain. She was later moved back to Abu Dhabi, where she was asked if she wants to train dogs.