You are here: Home > Grove Boats To Offer Solar Technology For Dubai Abras

By Dubai Expat Blog on January 20, 2012 in Business in Dubai, Dubai Transport, Living in Dubai 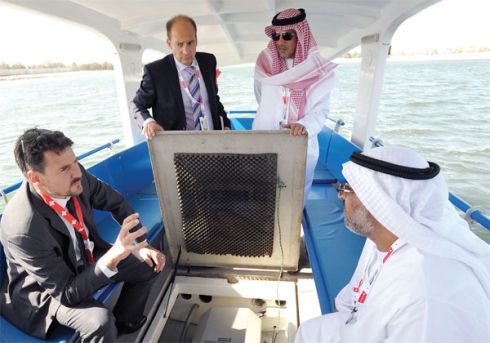 
As reported in Khaleej Times, Guy Wolfensberger, managing director of Swiss-based Grove Boats, will discuss this proposal with RTA officials during the Dubai Boat Show in March.

We have a plan for the RTA to provide solar power technology for the abras. We can provide the technology to replace the diesel engines with the solar power. With the technology, the traditional image and looks of these boats will not be affected. The solar-powered boats will also help protect the Creek’s environment as there will be no diesel discharge and no engine sound.

He said similar talks are being held with Abu Dhabi’s Department of Transport officials to sell passenger boats for transportation around Yas and Saadiyat islands. He said officials have been visiting their 24-seater Aquabus 1050, which has been brought here for the WFES exhibition, and shown their interest in the boat. After the summit exhibition, the boat will sail to Dubai to take part in Dubai Boat Show in March.

In addition to marketing the solar-powered vessels, the company also plans to set up a manufacturing plant in the UAE. Wolfensberger said they are already looking for investors and partners in the UAE to set up the plant.

Grove Boats, though based in Switzerland, its boat making facility is in Croatia. The company builds different types of solar-powered boats of different sizes, including luxury boats, ferries and, currently have manufactured a small sea cleaning boat.

The company, targeting tourism industry, including resorts, and public transport sector, is now designing new prototype and futuristic boats. It makes boats with capacity to carry ten to 100 people. The prizes for these boats vary from $100,000 to close $1 million.