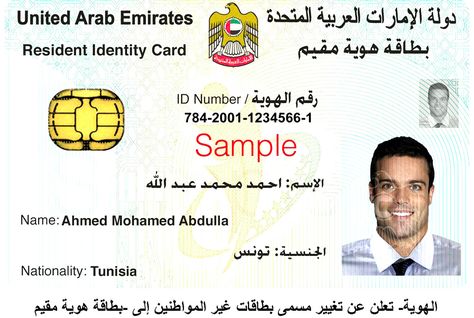 According to Arabian Business, EIDA has decided to rename Emirates ID Card to Resident Identity card from February 2013.


The smart cards is currently called Emirates ID Card for expat and Emiratis. The proposed change will differentiate or discriminate the expat residents from national citizens, as expat ID cards will be called Resident ID Card while UAE citizens will have Emirates ID Card.

The proposed change is in line with recommendations from the Federal National Council, which requested authorities distinguish between foreigners and UAE citizens.

Expats already in possession of Emirates ID cards will not need to replace them until they have expired.

Emirates ID Card was introduced by the UAE Government, in April 2006, as a single all-purpose identity card. Emirates ID Card, is compulsory for everyone living legally in the UAE, including nationals, expatriates and GCC citizens.

Emirates ID Card was launched as a all-in-one smart card to replace labour card, driving license, and other ID documents. However, the its usefulness is still to be seen. Expats have to renew their ID cards every time they renew their resident visas.